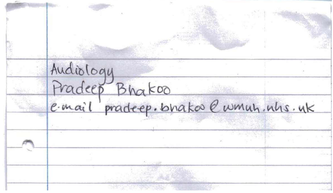 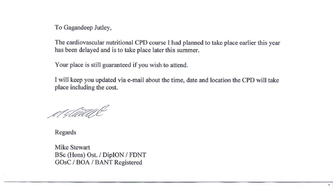 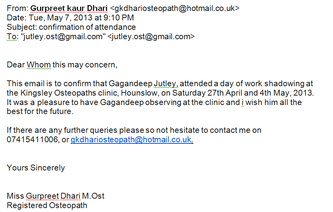 Nutritional CPD was meant to take place earlier this year, however now the course is to take place in late summer. I am looking forward to taking the course as adding nutrition will add another dynamic aspect to my current approaches to treatment. It will be based on cardiovascular conditions, something I have come across in clinic quite frequently.

I was originally meant to see two osteopaths, however one osteopath who I was waiting on a reply via phone or e-mail, who I had seen in person to arrange, did not get back to me in the end, so I decided to spend two days with the osteopath who I did observe. The osteopath I observed was a former colleague of mine, had qualified last year.

The clinic is in my local community and also gave me scope to see whether i would want to open a clinic in my area in the future.

I was very, very interested to see how much in one year, from being in the BSO to being qualified, she has developed. The first thing I noticed was the confidence. She told me about how when she had first started, her attitude was, believe in your ability or no one will, like biting the bullet. Patient numbers were low, however when observing I was amazed how much quicker it is when you do not have to present to tutors. Systemic questions were still routined. When observing techniques, they seemed still similar to what we learn in the BSO. All in all, what I took from this the most was that I feel I could qualify and come straight into private practice. I feel competent enough to not be supervised from another osteopath.
Even though my colleague recommended it, i am still in two minds.

I had visited West Middlesex Hospital, my local hospital. I had asked previously about if it was possible to shadow a radiologist, for a day or even just single screening process. I was not allowed to do so, I had to apply in advance early October. I was given head of radiology department email address and I was asked to e-mail him near August time to make an exception for me to shadow him for a day. He is the superintendent of the radiology department. due to his commitments to his other students, he is usually busy around school/college/university times. He usually has students from Kings College who are there for a year. Quite interesting how we have 4-6 hours of lessons on interpreting x-rays, when there is so much more to it from what was briefly described. Saying that I will know for sure if I do get the chance to shadow in late august.


A couple physiotherapists I visited local to make an attempt to observe, wanted me to volunteer for a week. I have given my number to Lauren Lodge medical centre who say they will call me back if i am allowed to observe for one day.
I had a friend who had been referred to a physiotherapist from a sports injury, who was more than happy for me to observe. It was his first consultation. From my observation I was amazed to hear what screening questions were asked. It included diabetes, rheumatological conditions, vague questions about urine and bowel habits. This in comparison to us who ask the patients questions and if symptoms start to correspond with illnesses we explore further. I wanted to be a physiotherapist before I found osteopathy, I am happy I did not do it, even though we are still not well known as a profession, an osteopath has the ability to do so much more.